A battle between monsters in Tokyo, shopping in a mediaeval town, ruthless fight over profits, or maybe would you like to test how sharp and quick you are in a race with a ...hedgehog? These are just a few opportunities awaiting board games enthusiast during a Board Game Tournament at Galeria Bronowice on 26th and 27th September. Everyone can find there lots of attractions, and there are prizes for the best players.

The last weekend of September at Galeria Bronowice should become a place to be for all those who enjoy playing board games or just want to delve into this adventure. On Saturday and Sunday various games: quiz, logical, economic and strategic ones are going to be played simultaneously at 30 different tables.

The youngest kids will have the opportunity to try their skills at such cult games as Dobble, Smashup, Hedgehogs in a Hurry and many more. The older board games fans can tackle their opponents at Carcassonne, 7 Wonders of the World, Monsters in Tokio, Dough, Scrabble, Astro Jam, The Law of the Jungle or Splendor. This is also going to be an opportunity to test your reaction time during a game of Halli-Gali and Speed Cups – all the games have been chosen by specialists and people well-versed in the novelties of the world of board games, which should guarantee that boredom is out of the question!

Some of the gaming sessions are going to be in the form of a tournament - the competition will be held once for each of the titles during the whole course of the game board event. That means 20 tournament games, the winners of which can get prizes provided by sponsors. The tournament is available both for beginners and more experienced players. Game masters, who will explain the rules and give the competitors some professional advice, are going to be in charge of the whole tournament.

But that is not all... A corner for the youngest children is going to be created at Relax Zone (Strefa Relaksu), where they can enjoy a large-format game called Imagilandia. On a giant board, which is 30 square metres large, children can become characters of the game and complete numerous quests by creating a magical story of fairies and elves. Moreover, there are also going to be display stands with the latest games and collectibles located next to the are of the tournament. This is the place where all the board games enthusiasts can see the premiere showing of a new game -– Bitwa o Tortugę (Battle over Tortuga)!

The Board Game Tournament is going to take place on 26th and 27th September from 11 am to 6 pm at Galeria Bronowice in Kraków. The admission is free and no prior registration is required from the participants. 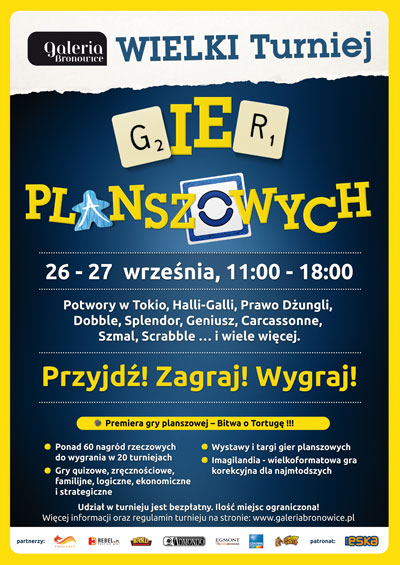