With Santa Claus through the world at Galeria Bronowice

Galeria Bronowice didn’t forget about the youngest customers during the Christmas season. All eager children will have the opportunity to talk and take a picture with Santa sitting on the throne. The whole thing will be complemented by an unusual 5-zone workshop on the character of Santa and Christmas traditions in different countries and regions.

1) GRANDFATHER FROST – RUSSIAN CHRISTMAS
Originally a character from East Slavic folklore, during the Soviet Union's existence. It was popularized there as the secular equivalent of Santa Claus, whom it is sometimes confused with. Grandfather Frost appears for the New Year to give children presents. His granddaughter is Snow Maiden.

2) LA BEFANA - ITALIAN CHRISTMAS
Befana is an old woman with a long, curved nose. She flies on a broom, enters the house through the chimney and leaves gifts it in a sock. Children are told that if they aren’t good, the witch Befana will put coal, ashes, onions or garlic in a Christmas sock. Legend has it that the Three Kings told the Befana about the birth of Jesus, but she didn’t meet him because she got lost. Since then, Befana, flying on a broom, leaves gifts in every home where the child lives, in case Jesus was in it.

3) SANTA CLAUS - BRITISH CHRISTMAS
The figure of an elderly man with a white beard dressed in a red outfit who, according to various legends and fairy tales, during Christmas gives presents to children, travelling by sleigh pulled by a reindeer team. According to various versions, he lives with elves in Lapland or the North Pole. He visits children on the night of December 24/25, leaving gifts in a sock suspended above the fireplace.

5) JUL TOMTE – SWEDISH CHRISTMAS
Along with the elves, gnomes and a galaxy of fairy-tale creatures, he was to sit under the floor or in the recesses of barns. During Christmas, he looks after the household members, livestock and belongings, and receives food in return. He appears with a sack full of gifts at the end of dinner or on the second day of Christmas. He puts smaller gifts into socks hung by the fireplace, sometimes adding sticky notes with riddles.

Attractions will take place on the first floor, next to the Polakowski Restaurant. 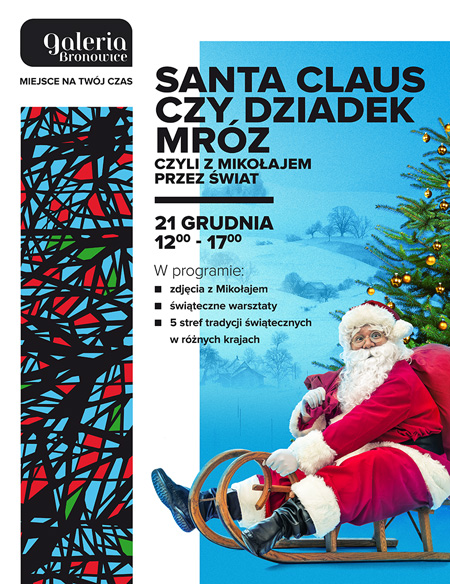