In Galeria Bronowice, there is a great opportunity for the youngest amateurs of tactical games. From the beginning of February, a series of free chess game meetings was launched, during which young players will explore the secrets of the royal game. Meetings are held every Monday, from 5.00 p.m.-6.00 p.m.

Chess was played in India as early as the 6th century. Currently, it is still very popular all over the world. The players require strategic and tactical thinking, which from a young age has many benefits. The royal game influences, among other things, the improvement of intellectual and emotional skills, as well as increases IQ and has therapeutic values.

Chess meetings for preschoolers and students of grades 1-3 are organized at the beginner level. In classes that take place in Grzybek (Mushroom) near the Polakowski Restaurant, you can take part until June 17th. As part of the project, the participants will learn the rules of the game from scratch and will play tournaments among themselves. For those who will catch the chess bug, there will be an opportunity to sign up for a club of enthusiasts of the royal game – Two Towers Krakow. 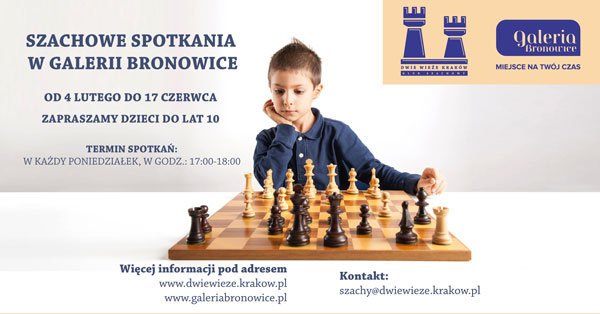