The Day of the Hummingbird or an extraordinary exhibition and workshops

Can colours have a special power to grant wishes? What do the children from the oncology ward dream about? You can learn all about it already next Saturday at Galeria Bronowice. On the 5th March an unusual exhibition presenting the works of child patients from the University Children’s Hospital in Kraków is going to be held here. The opening of the exhibition will be accompanied by art workshops.

The Day of the Hummingbird is going to consist of several events, including a preview of “The Power of Colours” exhibition, “Waking up the Spring” workshops, which will be accompanied by many other attractions such as a class in making origami cranes.

“The Power of Colours” exhibition at Galeria Bronowice is a special project of KOLIBER association. The works of the patients of the Children’s Oncology and Haematology Ward of the University Children’s Hospital in Kraków will be available for viewing in the zone below the ring on the ground floor of the mall starting from 5th March. These colourful pictures demonstrate how much joy and creativity the youngest patients have. The exhibition is going to be open till 12th March during the working hours of the mall.

The “Waking up the Spring” workshops show as much promise!

They are going to start sharp at noon, on Saturday, 5th March. The program includes: painting pictures with spring-inspired motifs, making animals of crêpe paper and newspapers, painting eggs made of polystyrene foam. What is more, children will have an opportunity to prepare spring decorations using various material. You can be sure that there are also going to be balloon animals, face painting and a fairy tale reading corner. Children will be able to take home all the decorations they make. The workshops are going to last till 4.00 pm. The admission is free.

On Saturday, starting from 12.00 pm, everyone interested will also have the opportunity to take part in a class in making origami cranes. The KOLIBER association, which works for the benefit of children with cancer - the initiator of the campaign - would like to invite both children and adults to join in making origami cranes. According to a Japanese legend when 1000 such cranes is made, a wish is granted. The origami making centre is to be open till 7.00 pm.

“The Power of Colours” exhibition can be viewed between 5-12th March in the zone below the ring on the ground floor of the mall. 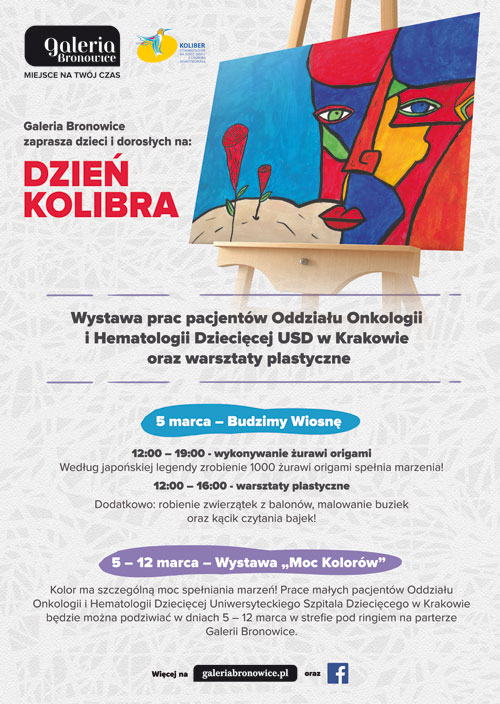