This weekend, from 20 to 21st of June, Galeria Bronowice is going to become an arena of a “royal” chess tournament organized for different age groups. Together with Małopolska Chess Association (Małopolski Związek Szachowy) the youngest shopping mall in Kraków wants to invite you to a Grand Chess Tournament. The prizes for the winners amount to almost PLN 5 thousand. The deadline for filing applications is 18th June.

During the chess tournament planned for the penultimate weekend of June at Galeria Bronowice, Swiss tournament system is going to be used, in accordance with the current international FIDE regulations. It means that the contenders are going to play against each other during 15-minute rounds.

The tournament is going to be supervised by the judges from Małopolska Chess Association. The Grand Chess Tournament is open to all non-members, chess enthusiasts and also members of chess clubs and associations. The application forms are to be submitted before 18th June to This email address is being protected from spambots. You need JavaScript enabled to view it. or you can also sign up on the day of the event before 11:30 am.

The attractions of the weekend do not end with the tournament alone. Additionally, on 20th and 21st of June, in front of the entrance to Galeria Bronowice there are going be workshops organized, where all the people interested will have the opportunity to get to know the rules of the game and literally “take their first steps” on a giant chessboard.

The rules and regulations of the Weekend Chess Tournament at Galeria Bronowice are available at www.mzszach.krakow.pl and here.

Participation in the tournament and workshops is free of charge. Please come and join us! 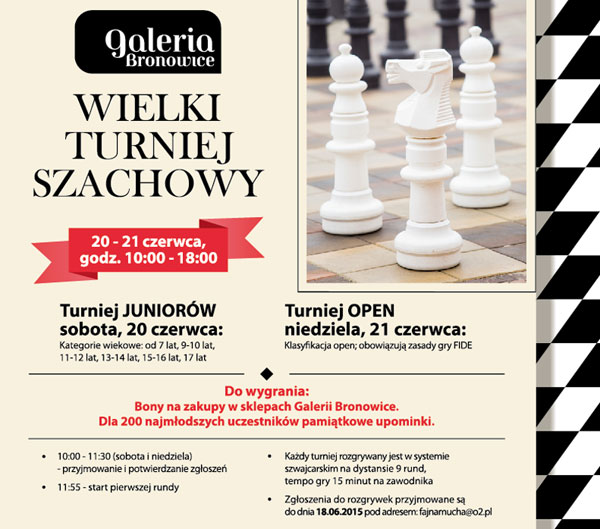