MATIO FOUNDATION from February 24 to March 1, 2020, for the nineteenth time, is organizing a social campaign called the National Cystic Fibrosis Week (program attached), which will be entirely devoted to the dissemination of knowledge about cystic fibrosis, its symptoms, diagnosis, treatment and possibilities of dignified and longer living with this disease.

The educational campaign at Galeria Bronowice (February 28-29) will be combined with many attractions, including preventive examinations and the "Teddy Bear Hospital".

Available for you will be:
- 2 glucose measuring stands,
- 2 blood pressure measure stands,
- BMI and body fat measuring station,
- measuring stand of  a CO in the exhaled air,
- breast and testicles self-examination stand,
- 2 stands of Marrow Hero (signing up for bone marrow donors),
- Teddy Bear Hospital,
- “Kostek z Klasą” and first aid,
- Information stand of the Matio Foundation with a can for voluntary donations,
- animation and art stand for children

The campaign slogan: "Cystic fibrosis - WHAT DO YOU KNOW ABOUT THE DISEASE" is to provoke the recipient to think about what cystic fibrosis is, can this disease affect me? If so, how to diagnose it or maybe someone in my environment is suffering from it, etc. For nineteen years we have been conducting education raising public awareness of cystic fibrosis, but this knowledge is still too small. Little is said about the disease, which is the most common among rare diseases. Therefore, the goal of this year's campaign is to focus not only on educational activities directed at a wide audience, but also directly to people who have a contact with people with cystic fibrosis every day, to people who can undertake educational or information activities about the disease in various environments, to people who knowingly want to help people with cystic fibrosis and their families, and above all to young people planning to start a family.

Rare diseases less often than other arouse public interest. Although some of them are fatal diseases, or change our whole live and the lives of our families, they still go beyond the area of ​​social interest. Therefore, in this year's campaign, we want to put special emphasis on raising public awareness of the rare disease that cystic fibrosis is.
Cystic fibrosis is a genetic disease caused by inheriting a faulty gene. Inheriting a normal or a faulty gene is always a random phenomenon, completely independent of us. Every 33th person is a carrier of a gene that can cause cystic fibrosis. We usually find out that we are carriers of a faulty gene when we have a sick child. Cystic fibrosis (CF) - a disease that we can’t see at first glance, is the most common genetic disease classified as rare. CF mainly manifests itself in very salty sweat, weight deficiency, and frequent and difficult to treat pneumonia. Patients live with the specter of imminent and premature death, usually due to respiratory failure. They spend almost half their lives on rehabilitation, following a strict diet, and taking thousands of pieces of medicine a year. In the last stage of the disease, they practically don’t leave the hospital bed.
A genetic disease cannot be prevented. That’s why, for 24 years, the Cystic Fibrosis Patients and Families Assistance Foundation has been fighting to improve the quality of life of patients, conducts campaigns and information campaigns on this incurable disease, and presents possibilities for diagnostics and treatment. Throughout the Foundation's activity, we spare no effort to make society recognize and understand the essence of this disease - disability 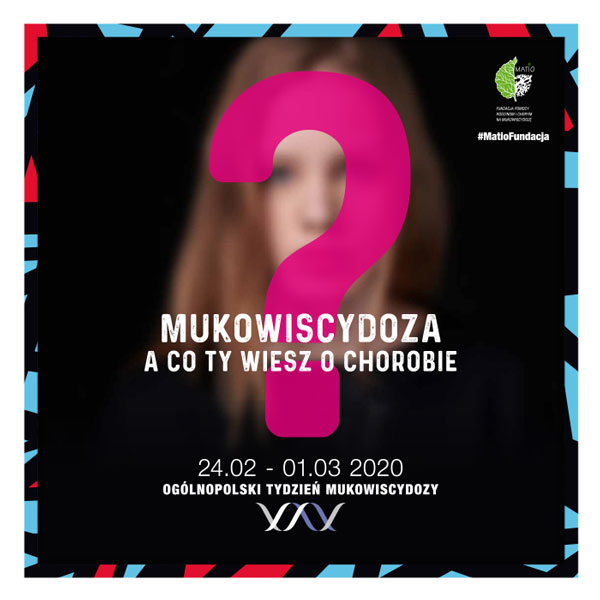