The annual pro-health campaign of Movember Polska has been launched. As part of the action, on Saturday, November 6, at Galeria Bronowice, free preventive examinations for men will be organized. Men before the age of 40 will be able to check the health of their testicles thanks to a painless ultrasound examination, while the rest will be able to verify whether the level of the prostate cancer marker (PSA) is normal.

Health tests at Galeria Bronowice at 61 Stawowa Street will take place from 10 am till 8 pm, the mobile office will be located on the ground floor, in the central point of the Gallery. There are no entries for the event, the order of arrival decides. Both ultrasound and PSA screening tests require no preparation other than personal hygiene. Krakow is one of eight cities where the Movember campaign will be organized this year.

- We have been operating in Galeria Bronowice since 2016. Although the pandemic made it impossible to carry out the health examinations last year, we hope that we will now be able to accept all those concerned. This is the only location in Krakow where we will held the test- says Jakub Kajdaniuk, the coordinator of the campaign from the Kapitan Światełko Foundation.

The Movember Polska campaign has been teaching men how to take care of their health since 2014. The organizer of the activities is the Kapitan Światełko Foundation. So far, the campaign has only focused on physical health and cancer prevention. This year, the organizers, together with the ambassadors of the campaign, also decided to raise the issue of mental health, another taboo topic among men.
- What goes on in a man's head is as important as what goes on in their panties - say the Organizers. During the COVID-19 pandemic, due to social isolation, but also the worsening economic conditions of many people, the number of suicides among men increased by as much as 20%. Mental health issues are now as challenging as the diagnosis and treatment of prostate cancer.

All for one
Youtubers - Cyber ​​Marian and Michał Bańka (from the Baniak Baniaka channel), presenter Mateusz Jędraś, Juan Zumeta and Jakub Nowicki - became the campaign ambassadors again. This year they were also joined by vocalists: Krzysiek Sokołowski (from the band Nocny Kochanek), Adam Asanov (from the band Piersi), Paweł Dudek (from Czadoman) and Błażej Sobera (from the band Joe Palooka) - representatives of various circles who, as "Mosznowładcy"recorded a new "hymn" of the campaign - "All for One".

The rock song encourages you to use the support of specialists who help you take care of your health in every aspect, whether it is physical or mental. The song "All for One" also reminds us of how important it is to support each other and how helpful a simple conversation and openness to other people can be.

For the seventh time, the campaign and research organization are supported by Nationale-Nederlanden - the company was awarded the title of Benefactor of the Year 2020 in the "Health" category for its involvement in Movember Polska.

The research is organized again thanks to the support of Bayer, Profimedical and Hydrex with the Domowe Laboratorium brand. Herbapol Poznań, BNP Paribas and the STMT brand have also joined the group of campaign partners. The ambassadors were supported by Kubota for the third time. 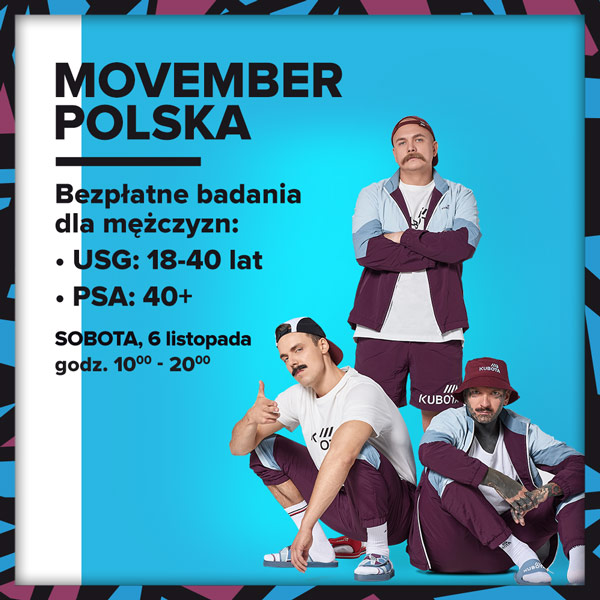